We Can Expect Eleven Rate Hikes Through 2024

Understanding how markets have reacted to previous Fed-hiking cycles

At their recent March meeting, the Federal Reserve moved its fed funds target rate from near zero to a range of 0.25% to 0.50%. It was the first rate hike since 2018.

But the Fed also released the so-called “dot plot,” which shows where individual Fed officials expect interest rates to be. And given the surge in inflation numbers – from the perspectives of both consumers (CPI) and producers (PPI), the majority now expect seven hikes in 2022, four in 2023 and none for 2024. (In other words, there could be a rate hike at every remaining Fed meeting this year and at half the meetings next year.)

If this comes true, it would be higher than the Fed’s estimate of the long-run neutral rate, (which is 2%), and would suggest a more hawkish policy that could be more restrictive to growth.

Interestingly enough, when the Fed raised rates 25 basis points and released its “dot plot,” stocks rallied, suggesting that Wall Street appreciates the path that has been outlined. But how have markets responded to previous Fed hiking-cycles?

Let’s examine the more recent cycles where the Fed has hiked rates, along with the change in rates and S&P 500 returns.

The Five Tightening Cycles Since 1985 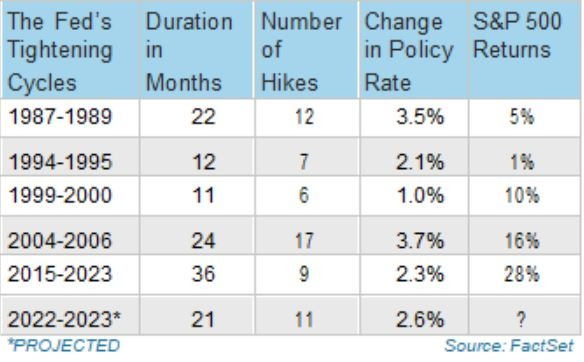 Economists love to espouse the notion that rising rates are bad for stock markets, as rising rates eat into future profits. And in theory, this makes sense. But here are a few things to keep in mind.

First, forecasts for 2022 Gross Domestic Product (GDP) growth is estimated by the Fed to be 2.8%. Yes, this is down from just a few months ago, but it’s still well above the 2.0% average from the last 10 years.

Next, unemployment (3.8%) is still very low – in fact it’s nearly at record lows. Further, the number of job openings exceed the number of unemployed by the widest margin in the past 20 years. This suggests that we will be in a tight labor market for a while. 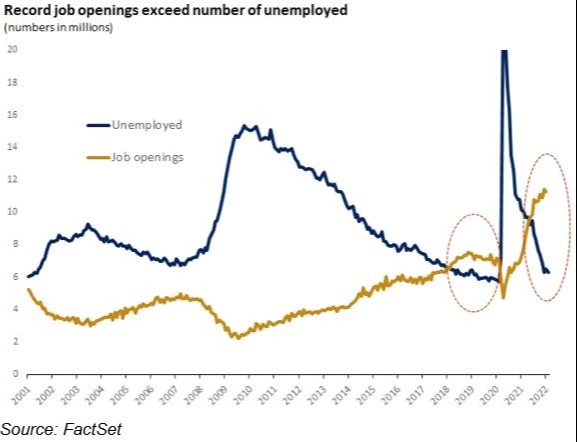 Looking at the five tightening cycles since 1985, stocks have generally struggled around the first interest rate hike but then generally headed upwards six months and a year later.

That, of course, did not happen this time as stocks leapt after the Fed raised rates 25 basis points on March 16th.

In fact, consider that for the week that the Fed raised rates, investors saw:

Will future Fed hikes continue to fuel such rallies? Very, very unlikely. But maybe the projected 2.8% GDP growth rate and our current 3.8% unemployment rate are more powerful relative to that 25 basis point rate increase? Whether that is true or not is, of course, anyone’s guess.

Nonetheless, you might do well by remaining optimistic during future Fed rate hikes.

Important Disclosures
The opinions voiced in this material are for general information only and are not intended to provide specific advice or recommendations for any individual.
Stock investing includes risks, including fluctuating prices and loss of principal.
Past performance is no guarantee of future results.
The Consumer Price Index (CPI) is a measure of the average change over time in the prices paid by urban consumers for a market basket of consumer goods and services.
Producer Price Index (PPI) is an inflationary indicator published by the U.S. Bureau of Labor Statistics to evaluate wholesale price levels in the economy.
Gross Domestic Product (GDP) is the monetary value of all the finished goods and services produced within a country’s borders in a specific time period, though GDP is usually calculated on an annual basis. It includes all of private and public consumption, government outlays, investments and exports less imports that occur within a defined territory.
S&P 500 Index: The Standard & Poor's (S&P) 500 Index tracks the performance of 500 widely held, large-capitalization US stocks.
The NASDAQ-100 is composed of the 100 largest domestic and international non-financial securities listed on The Nasdaq Stock Market. The Index reflects companies across major industry groups including computer hardware and software, telecommunications, retail/wholesale trade and biotechnology, but does not contain securities of financial companies.
Dow Jones Industrial Average (DJIA): A price-weighted average of 30 blue-chip stocks that are generally the leaders in their industry.
The Russell 2000 Index is an unmanaged index generally representative of the 2,000 smallest companies in the Russell Index, which represents approximately 10% of the total market capitalization of the Russell 3000 Index.
All information is believed to be from reliable sources; however LPL Financial makes no representation as to its completeness or accuracy.
This article was prepared by FMeX.